While many know that today, the fifth day of May, is Cinco de Mayo, few know the origins of this Mexican celebration. Cinco de Mayo is not Mexican Independence Day; that is celebrated September 16, just as the Americans celebrate our country’s Independence Day on July 4. On the fifth of May in 1862, a vastly outnumbered, yet decisively courageous Mexican army defeated French forces, and since that day the military victory at Puebla is remembered and celebrated each and has become a source of pro-Mexican nationalism and pride, . 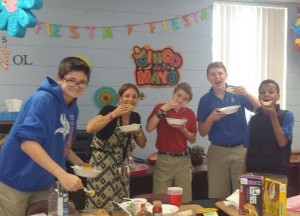 At Trinity we are proud of our Spanish programs, running through our curriculum from the CDC to Grade 8. Under the enthusiastic and demanding instruction of Mrs. Primelles, we aim to prepare each Grade 8 graduate with Spanish Language skills to enter high school taking Spanish II as freshmen. Five students in the Middle School opted to take Hispanic Cultures as their elective; taking aim at cultural appreciation beginning with history and famous people, to customs and distinctively delicious food. On this Cinco de Mayo, Hispanic Cultures students learned to make authentic tacos, and served the fare to their classmates! Ole!