With the fifteenth anniversary of the 9/11 attack on the World Trade Center nearing, how do you understand the cataclysmic event?  The question is but a prelude to a much larger question perplexing an anxious western psyche, how do you explain evil in the world?  How does Trinity’s Biblical world view cement a proper distinction of good and evil, and expound God’s enterprise (His omnipotence and His omnipresence) in the world today?  There are unequivocally profound responses to these longings.  In Chapel this week, we shed Light on 9/11.

With 9/11 anniversary this weekend, and with a desire to help our students of all ages understand evil, in the context of God’s goodness, this week’s Chapel was split, with students in  Grades 3-8 worshiping at 8:30, followed at 9:15 with Chapel for students in Grade 2 on down to the Threes in the CDC.

Photos from 2001 (that couldn’t be shared with younger students) were displayed during Chapel with an intent to inform and not alarm our older students. Only one photo of the burning towers was displayed, and that was a picture of the front page of 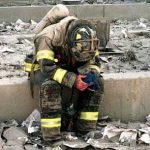 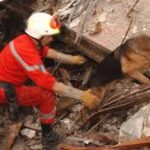 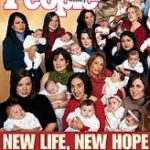 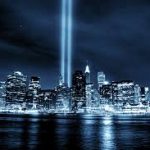 the Rocky Mountain News, with the headline, “America Sees Evil.”  All the other photos, some reproduced in this blog post above, were of the rescue, because that was the real story of how God was present, as He always is, in the midst of tragedy.  The World Trade Center attack was not the only evil that happened around the world on 9/11/2001: a pipe bomb blasted Belfast, war raged between Christians and Muslims in Nigeria, a destructive forest fire engulfed property and homes in Portugal, 16,000 crimes were committed, 1500 people died of cancer that day, politicians took the defense in the courts … all of which stood as examples of evil beyond the New York terror that day.   Martin Luther expounded evil as stemming from the world (forest fires and earthquakes), the devil (crimes, war, and terrorism), and our sinful nature (frail bodies and weak ethics). While this all leaves us with a sense of the dismal, forlorn, and dark, there is a secret, revealed in promise of God’s Word, that few know, and 1 John 2.8 expresses it this way, “the dark is fading and the light is shining” (the context of the whole verse is: On the other hand, I’m writing to give you a new commandment. It’s a truth that exists in Christ and in you: The darkness is fading, and the true light is already shining.)

The photo with the most display time, that stayed visible throughout most of the Chapel service was of the twin towers Memorial. The twin beams of light that mark a resilience in contrast to the darkness on that day marked by evil. Vigils of light, staged so often all across the world from New York, to Victoria Park in Hong Kong, and recently in Orlando, all signal how light is a beacon of hope for a world beset by dark unspeakable tragedy, and by sin, death, and the devil.  During our Chapel time, we lit our own candles, and prayed the Lord’s Prayer with an emphasis on three pivotal petitions in this Prayer which address evil, through Luther’s meanings of Thy Kingdom Come (we pray that God’s kingdom would come among us), Thy Will Be Done (God opposes those who keep believers from hallowing His Name and keep His Kingdom from coming), and But Deliver Us From Evil (rock solid and obvious).  At the recitation of this final petition of the Prayer, the worshipers paused; there in the middle of the Lord’s Prayer, at the words “deliver us from evil,” we shared two minutes of silence to think about the light illuminating the Sanctuary at that moment from the palms of our hands, and in the three petitions enfolded in our hearts. The moments of prayer enlightened our understanding of God’s continued response to our plight with the devil, the world, and our sinful nature.   After the reflective pause, we then finished with the resounding, For Thine Is The Kingdom, Power and Glory, Forever, And Ever, Amen!

For the younger children, thoughts were directed to goodness, candles, and light. We sang God is So Good, He’s Got the Whole World in His Hands, and This Little Light of Mine. Everyone recalled the candles on their birthday cakes, and how you put them out by blowing. Children thought that another way to put out fire is with water (fire trucks capture kids’ attention, too).   When asked if darkness could put out a candle, the children weren’t so sure, and suddenly the lights in church went out, but the darkness did not put out the light.  John 1 explains that Jesus is the Light, and the darkness can never put it out.  Light is stronger than darkness!  All that is needed is our  conviction that is stronger than darkness!

God is in Compassionate Control over His Creation, 9/11, and all of us; need proof?