For four weeks this Fall, students in Grades 3-5 traveled to four different stops along a timeline of events from Florida’s history. Enriching the Social Studies curriculum for Florida and its People, Ms. Crawford organized excursions for students and parents to tour the Space Coast, savor Spanish cuisine at a local restaurant, experience the State Capital and FSU in Tallahassee, and explore St. Augustine. 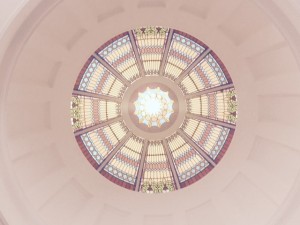 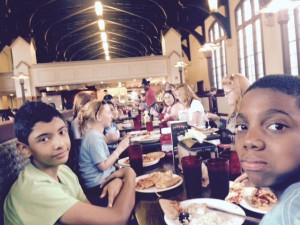 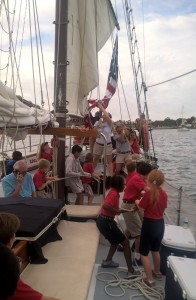 aboard a 2/3 scale replica) landed on the shores of St. Augustine in 1513. As shipping changed over the years, so did Florida, and steamships (students dressed up as passengers and the crew of a steamer) replaced sailing ships as Florida developed and progressed to statehood in America.

Following an introduction to state government at the State Capital, Trinity students were assigned State Senator’s desks, and then role played passing a bill in the Legislature. Recognizing that the State Seal of Florida is composed of flowers and a steamship, Trinity students, remembering their trip to the Kennedy Space Center, debated whether the Seal should be changed by replacing the steamship with a spaceship. Pros and cons symbolizing the preservation of the past and promoting the future were offered in the Senate Chamber, until “Senator” Jenkins (at 8 years old) put the measure to a vote. Fear not, the bill was defeated, 12 yea to 18 nay, so the steamship is safe, for now, but on our next overnight trip to Tallahassee, the Seal is still in Trinity’s sight! With these adventures across our state, our students now know so much that they can ponder a new bill for our beloved state.

I cannot close this blog without expressing Trinity’s thanks to four individuals who made many of the arrangements with Ms. Crawford for these trips. Jenn McDaniel spearheaded the Kennedy Space Center trip, making arrangements for the overnight stay and our guest speaker about the history of space exploration at NAS. Meredith Hinshelwood, a graduate of Trinity and the University of Florida, is employed by the Chief Financial Office of the State of Florida, arranged for our students to actually vote on the Senate floor and then for each student to sit at the actual desks of our State Governor, Attorney General, Commissioner of Agriculture, and the CFO, all of which happened while other school groups could only tour the outside of the State government complex. We truly had an inside view of the State government due to Meredith’s connections. Monica Hasan, Jordan’s sister is a freshman at FSU, and she gave us a guided tour of the beautiful campus which ended with dinner at the Suwanee Café (it does look like Hogwarts!). And finally, Mrs. Primelles, our Spanish teacher, recommended Agave Azul for our delicious Spanish and Mexican cuisine.